Hello everyone! It’s definitely been way too long since I’ve written a post on here! Over the last few weeks Mom, Dad, and I have been able to do and see so many new things across Oregon and California!

First off I would just like to thank our amazing host family/friends who let us stay with them for our time in Oregon. Bill & Cathy, you two are such wonderful people whom we will forever be grateful to have in our lives, we are definitely family now! 🙂 Our time with them was the most relaxing and fun-filled time I believe the three of us have had in a while! Almost every day we had home cooked meals, whether it was us or them whipping something up, it was always delicious.

Bill and Cathy also introduced us to the awesome card game of golf, that at times I think the neighbors heard us cheering and celebrating when each of us won! I know we all enjoyed relaxing at the end of the day watching movies and great shows like The Voice. When we first arrived, Cathy’s granddaughters introduced us girls to an app called Panda Pop, and since then Cathy and I have been trying to see who could get through the levels faster. haha There’s honestly too many fun moments with them to list! 🙂

Playing one of many rounds of golf 🙂

Mom, Dad, and I were able to see quite a bit during our time in Oregon; it’s definitely a must see if you’ve never been! As for you cyclist, runners, and triathletes, you absolutely must go and ride in the Bend/Redmond area. I had wonderful riding and running routes that as far as safety, had more than enough room. One thing I learned from having a Garmin is that it records segments that other athletes with Garmins have completed; it sure was fun “racing” others on certain courses! The neighborhood we were staying in had wonderful running roads and trails too; it’s been great getting back into long distance running since my spine surgery! 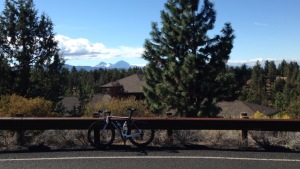 Riding in Bend and Redmond made for wonderful photo-ops 🙂

While exploring in Bend we came across a RV park that had a life-sized Dala Horse. Since Mom is half Swedish, she was so excited to get a photo with it, definitely a one of a kind finds during our trip!

Our stay in Oregon was well spent, and it was definitely hard to leave such a wonderful place (and people). I know we are looking forward to going back in the near future. 🙂

After finding out our rv was ready to be picked up, we decided to take the Pacific Coast Highway back down to Los Angeles. On Wednesday morning we packed up all of our belongings and headed south to the rv shop.

Before we started this entire trip I had been wanting to see the beautiful giant Sequoias in the Redwood National Parks, and boy did we see some giants! We made our way through southern Oregon getting on the 101 in Crescent City. Jedidiah Smith Redwood Park had one tree that had to have been the biggest one along the entire 101; pictures really can’t do these giants justice.

We crossed into Crescent City during low tide so I was stoked to be able to “walk across the ocean” to the Battery Point lighthouse. Standing up there all alone was pretty amazing; being surround by water with just the sound of the ocean crashing into the lighthouse island was so peaceful. 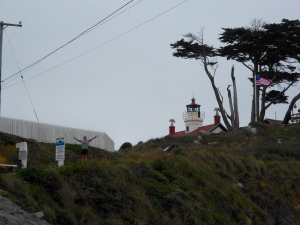 Driving further down the 101 we stopped at Anchor Way to check out the sea-lion hang out; about forty sea lions were chilling on a couple of docks! It was pretty entertaining watching and listening to them bark and bellow at each other, they are definitely quite social! 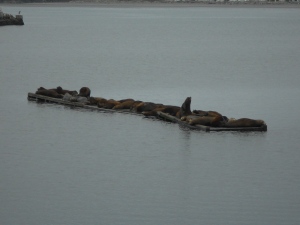 Driving through the Redwoods we continued to be amazed by such beautiful giants, and were able to stop and stand at a few older ones for size comparison. 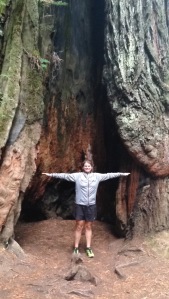 Further down the 101 we were stopped by well over thirty elk just standing in the road, enjoying their dinner of highway grass. These creatures are massive and definitely not afraid of people. We were smart though and decided to take our photos from inside the car. 🙂 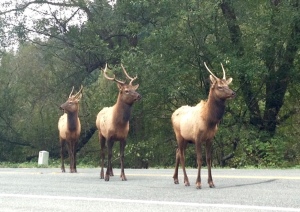 Getting closer to San Francisco we decided to pull over and get some sleep. We tried to find a hotel to stay in for the night but for some reason they were all booked so we slept in the car for a while. Not the most comfortable situation but it worked for one night and made for a great sunrise view! Luckily we were within fifteen minutes of the Golden Gate Bridge just as the sun was rising, so it was quite the sight. Pulling over at the lookout point we got to take some great photos, checking off another thing to see on our bucket lists.

Driving over the bridge and through San Francisco, we got caught in morning traffic so we decided to pull over and grab a bite to eat and relax until traffic calmed down. Within a mile we spotted an IKEA which is the best place anyone could stumble upon for food and for stretching their legs. Where else can you get free coffee and a dollar breakfast plate?! I think each of us had about five cups of coffee too. Bonus points for a huge area to walk around and get the blood flowing in the legs again. 🙂

After relaxing for a good two hours we hit the road and started making good time. We drove through one city that had vineyards stretching on both sides of the highway for miles, it was absolutely stunning! Mom was excited to stop and visit the Andersen’s restaurant which is famous for its pea soup; they had a cute little museum and gift shop too! 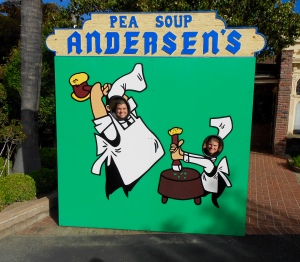 Making it to the outskirts of Los Angeles we decided to stop in Simi Valley, and were lucky enough to find a hotel that had some great perks. That night they had complimentary wine, cheese, and crackers for guests, which was a nice treat. The three of us passed out pretty quickly that night, getting a great nights sleep. The hotel had a couple treadmills so I was stoked to wake up a little early and get a good hour run in. Mom and Dad were definitely happy to wake up to an endorphin-pumped daughter and a delicious breakfast buffet. A good start to our next few days in California. 🙂

View all posts by Amanda